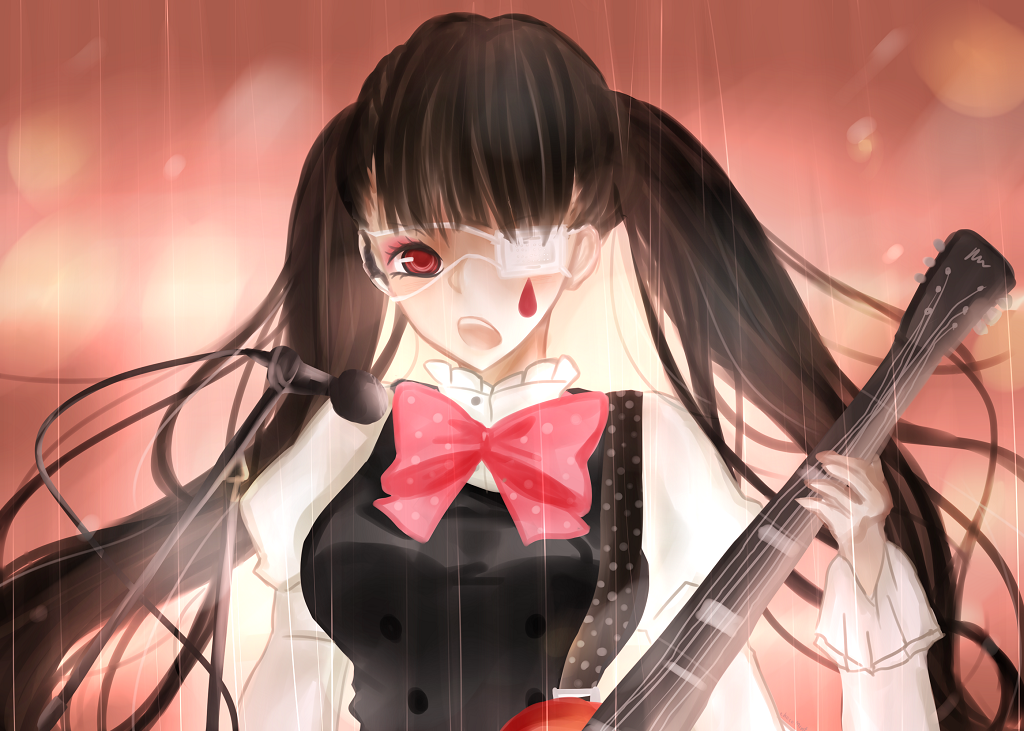 Beck is the spearhead in this genre, a series that accumulates years and years without realizing it, but that ages in the best possible way.

Our protagonist, a 14-year-old boy, named Yukio Tanaka (or better known as Koyuki), has very little reason to enjoy life. However, this changes when he saves a strange-looking dog, named Beck, who was attacked by a group of children. The owner of this dog is Ryuusuke Minami, creator of a popular rock band, guitarist, and songwriter.

In this series, we will experience the different dramas that many bands and their members go through to achieve their dreams. In this case, BECK, named after Minami’s dog, is gaining strength as the episodes pass, and thanks to this we can enjoy incredible musical compositions, made mostly by a Japanese band called Beat Crusaders (BECR).

It is very likely that, although you may not have seen the series yet, you know its famous theme: Hit in the USA, opening song of this incredible series.

Like almost all anime music, this story is based on a group of girls who form a band and play the music they are passionate about. K-On is characterized by a waste of shallow situations that aim to distract us and have a pleasant time with each episode.

Yui Hirasawa is a first-year high school girl desperately looking for a club that she can join. Finally, he finds the music club where he meets Ritsu Tanaikana (drummer), Mio Akiyama (bassist), and finally Tsumugi Kotobuki as a keyboard player.

We will see the protagonists trying to solve problems such as looking for money to buy a guitar or perhaps we could enjoy a small cup of tea in the company of best friends. However, despite not having such a large catalog of music for this series, the focus falls into this category.

In this case, we are not talking about a rock band, but rather something more directed at youth J-Pop focused on anime. It is important to highlight that we will listen to their children’s voices from beginning to end without losing the style.

Gravitation may be unfamiliar to many, but to some, it is arguably one of the pioneering anime in the music genre. Recall that this series is Boys Love themed.

It tells the story of Shuichi Shindo and his band, Bad Luck, who dream of becoming the next musical sensation in Japan. However, the story also centers on Shuichi’s constant struggle to win the heart of the indifferent writer Eiri Yuki.

Bad Luck, Shuichi’s band, has two members, Shuichi, the main vocalist, and Hiroshi Nakano, the guitarist. Shuichi wants to be Japan’s next star and follow in the footsteps of his greatest idol, Ryuichi Sakuma, lead singer of the legendary band Nittle Graspe.

One night, as the protagonist struggles to write the right lyrics for a song he’s composing, he bumps into a stranger who accidentally reads the lyrics. The stranger rebukes Shuichi’s work and describes it as trash, which deeply affects Shuichi. Despite his anger, he is intrigued by the subject, who turns out to be the famous romance novelist, Eiri Yuki.

In the case of Gravitation, the music can be termed as synth-pop as it has great use of synthesizers and keyboards. Singer Kinya Kotani performs the Bad Luck songs.

Nana is one of those anime that you cannot fail to mention when talking about a musical. It has a beautiful storyline, excellent animation and is a classic in its genre.

Nana tells the story of the two Nana: Nana Komatsu and Nana Osaki. Komatsu has a habit of falling in love at first sight and being dependent on others. When her friends and boyfriend go to Tokyo, she decides to follow them for a year after saving enough money.

Osaki, meanwhile, is the lead vocalist for a band called Black Stones. Since the age of 16, she lived with her boyfriend, bassist Ren Honjo, but when Ren is offered the job of bassist for the famous band Trapnest, Nana decides to follow her dream and cultivate her career.

At 20 years old, both Nana take a trip on a train where fate brings them together, and they make an extraordinary friendship.

The Nana series is famous for having a soundtrack full of punk and rock themes. The themes were in charge of Anna Tsuchiya and Olivia, Japanese singers and songwriters.

Your Lie in April

In April, your Lie tells the story of Kousei Arima, who was a prodigious and famous pianist at his young age. His mother, who was also his teacher, died of an illness that kept him hospitalized for most of Kousei’s childhood.

Due to her mother’s passing and remorse for leaving her alone, Kousei had a crisis during a piano competition. As a result, the protagonist cannot play anymore, as his anxiety prevents him from hearing the notes.

Two years later, he attends high school with childhood friends, until one day a strange girl changes his life. Kaori Miyazono, an outgoing violinist, whose musical style reflects her personality and a desire to be remembered by the public for her music.

Kaori helps the protagonist return to the world of music, and shows him that it should be free and unpredictable, rather than structured and rigid, the style Kousei is used to. Your Lie in April is known for its endearing history and pieces of classical music.

Kids on the Slope

The story is set on the island of Kyushu, in a small town in Nagasaki prefecture, in the mid-1960s. Kaoru Nishimi is a shy and naive boy with problems making friends, as he moves too much due to his father’s work. However, during the summer of ’66, he promises to change thanks to two companions who unexpectedly enter his life, Ritsuko Mukae, the class delegate, and Sentaro Kawabuchi, a scruffy and troubled young man.

Thanks to Sentaro, Kaoru, until then, a classical pianist, enters the world of jazz. Kids on the Slope, also known as Sakamichi no Apollon, is an anime about growing up that takes place thanks to the jazz genre and is widely recognized as one of the most endearing anime of the musical genre.