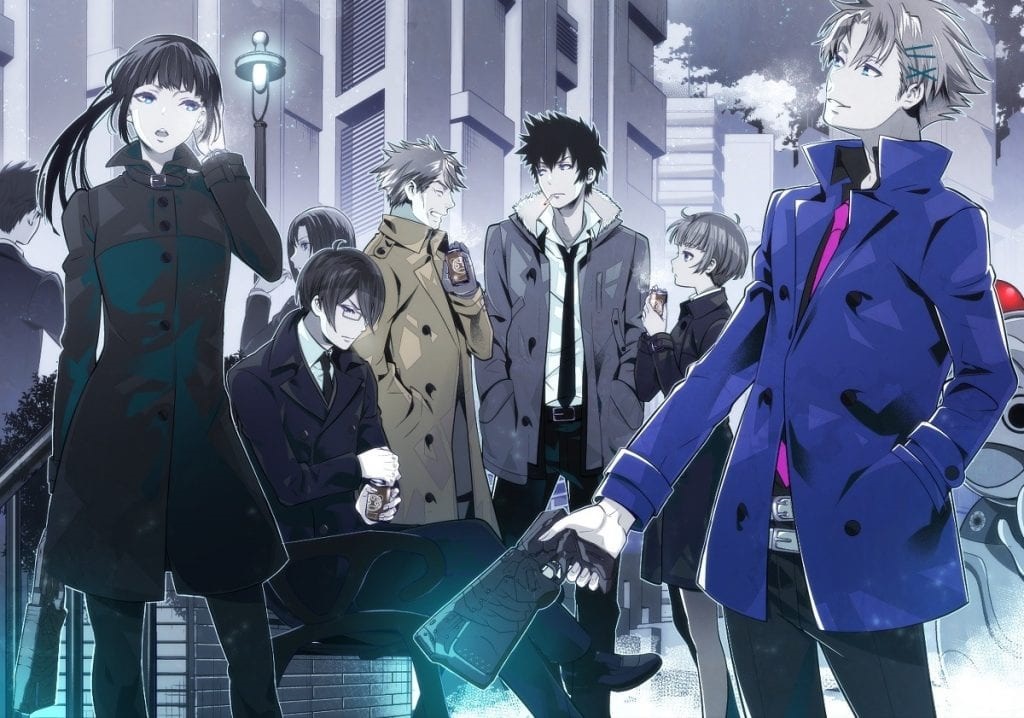 14 May Best seinen anime of the new era

Regardless of who you are and how you feel, we offer a proposal here with the best seinen anime. As usual, the titles listed are not ordered from best to worst. That’s up to you!

Baccano! Tells the story of different characters, apparently without any connection. However, all the narratives are connected, in a very messy plot, but simultaneously, very well spun.

Also, the plot presents a non-linear sequence, with different dates and places, showing different points of view about a certain event that occurred in New York in the 1930s: the recreation of an elixir of immortality.

The plot unfolds between 1711 and 1933 and each chapter relates a different event located in a different period. History tells us mainly of the events that occurred on a ship crewed by alchemists in search of immortality in 1711. The events occurred on board the transcontinental train Flying PussyFoot in 1930-1932 and the fight of rowdy gangs that occurred on those same dates.

Alchemists, gangsters, thieves, psychopaths, and supernatural forces are some of the charismatic protagonists of this series that, due to the constant temporary jumps in history, requires the viewer to pay more attention to avoid getting lost in its complex plot.

It was created by Ryohgo Narita (script) and Katsumi Enami (illustration), Baccano! It was originally released as a light novel in 2003. The anime adaptation would arrive in 2007 and would have a total of 16 episodes.

Based on Gō Nagai’s Devilman manga, this series directed by Masaaki Yuasa and written by Ichirō Ōkouchi premiered on January 5, 2018, and is available for worldwide broadcast on Netflix as a 10-episode original series.

Devilman Crybaby talks about the threat of a demon race planning to conquer the world of humans. High school student Akira Fudō and his best friend Ryō Asuka want to prevent that from happening, but they need to make some sacrifices.

After going to a tremendously disturbing demon party and believing that the only way to defeat the demons is to seize their powers, Ryō suggests to Akira that she join one of them. In doing so, Akira transforms into Devilman, a kind of demon that nonetheless preserves the student’s human soul.

This series is undoubtedly one of the boldest productions on Netflix. Baroque, excess, stark, and depraved lust, hypersexualization, and total absence of morality are some of the hallmarks of this exaggerated and colorful anime that tries to study human (low) passions and where aesthetics prevails over ethics.

Despite this wrapping, superficial due to an excess of aestheticism, and where techno music plays a fundamental role (those great street rappers!). The story deals with themes of great importance in an interesting and stark way: racism, loss identity, the disintegration of the family …

Do you have any doubt that this anime is one of our favorites and that we consider it essential for any super-fan, whether or not it is a taste of the genre? Just in case, here we leave you the trailer. When you are hooked, remember that it was on this page that we recommended it to you!

Created by Tensai Okamura, Darker than Black is about the mysterious emergence of a supernatural phenomenon in Tokyo and South America (mainly in Brazil) that turns those areas into spaces known as Hell’s Gate (Gate of Hell) and Heaven’s Gate ( The door of Heaven) respectively, both doors being the two faces of the same thing.

In those places, the sky was replaced by false stars (representing lack of feelings) and some people began to have special abilities. Those people are classified as Dolls, Contractors, or Moratoriums. In addition to their supernatural abilities, the first two present the lack, absolute or partial, of emotions or behaviors such as empathy, sociability, or conscience. Third parties have no control over their abilities and sometimes display them due to emotional stress.

The governments of nations secretly use individuals called Contractors on violent missions. An interesting peculiarity is that every time a Contractor uses his power, he must make a “payment.” This penalty can range from drinking a beer at the nearest bar to having to do tremendously disturbing things.

Imagine discovering that you are immortal. How do you think your environment would react knowing that you are going to be wandering forever on Earth and they are not? We assure you that, in the world in which Ajin: Demi-Human takes place, that would surely be a big problem.

The story centers on Kei Nagai, a student who discovers after an accident that he is an Ajin, a creature of an immortal race. The Ajins are seen as terrorists by humans trying to capture these immortal beings to study and exploit their skills.

The entire plot revolves around the social, political, and ethical conflicts that hang over the society divided between mortals and Ajins. As a good sign of mystery and horror, the series is full of visceral scenes capable of turning a sensitive stomach. At 13 episodes, the anime is available on Netflix and also had a live-action adaptation in 2017.

With just 5 episodes, Afro Samurai is a tribute by Takashi Okazaki (creator of the original manga ) to the classic blaxploitation movies of the 70s.

With a healthy dose of black humor, hip-hop, and incredible sword fighting, Afro Samurai takes place in a futuristic, post-apocalyptic Japan with feudal characteristics where society is destined to obey the bearer of “Tape Number 1”, a symbol of maximum power.

There are seven different types and samurais must follow a hierarchy of numbers to challenge their opponents. In other words, only those who have the number three ribbons can fight against the one with the number two, which, in turn, is the only one who can challenge Number One.

This cutting-edge series, produced by Samuel L. Jackson (who also voices Afro), can be easily found on YouTube. The plot is very violent, with touches of humor, a lot of action, and a lot of blood.

The main character of the series is partially inspired by the life of Yasuke, a true samurai of African origin who lived during the Sengoku period, at the time of Feudal Japan.

Pycho-Pass is a cyberpunk dystopia in a world where people’s mental capacities are constantly being evaluated. If a citizen is diagnosed as a potential criminal, he can be sentenced to prison or death, even without having committed any crime. This probability is known as the “Criminality Coefficient” index and consists of a number associated with each person’s color.

The Executors are responsible for capturing the Sybils (the “potential unrecoverable criminals”) and ending their lives. However, the executors themselves are a special team of potential criminals under the supervision of the Inspectors. Both corps employ special weapons called “dominators,” designed to fire only at those with a higher crime rate than what is considered “normal.”

The story addresses various issues of an ethical, moral, and psychological nature, posing a supposedly utopian society in which one lives without the fear and stress of suffering from the crime. But what would be the true consequences of this for the population? Throughout the plot, we find several cases that exemplify the moral and ethical conflict that this system causes, both from the perspective of the main antagonist and the same system that governs society.

The anime has two seasons and in January 2019 the premiere of a film-series divided into three parts (Psycho-Pass SS) is scheduled.

A mix of action, horror, and science fiction, Gantz was created by Hiroya Oku and was adapted for the anime in two seasons by the studio GONZO.

The story tells of Kei Kurono, a selfish and apathetic 15-year-old boy who is killed by a subway train as he and his friend try to rescue a beggar.

Suddenly, both are in Gantz’s presence, a “black sphere” that forces them to participate in a macabre, sadistic, violent, and bloody game that they cannot deny. To that end, it puts a whole futuristic arsenal at your disposal that they must learn to use to combat various species of aliens and other threats beyond the knowledge of the rest of the mortals.

The anime has very strong scenes and situations, which can easily disturb the most sensitive people. Due to its bloody content and nude scenes, it was censored in some countries. It has a film adaptation in the real image, which had two parts and was quite successful.

The Fate / Zero story unfolds 10 years before the events seen in Fate / Stay Night, the visual novel created by the Type-Moon, which later also ended up being adapted as an anime.

However, even if you’ve never seen any other anime in the Fate series, you can get started with Zero easily. This seinen functions as a prelude to history, showing details about the Fourth Holy Grail War.

The War for the Holy Grail is a battle to the death in which seven magicians ( Masters ) summon seven heroic spirits ( Servants ) to fight a battle between them; the winning team will be worthy of the power of the Holy Grail, capable of granting any wish.

Zero is one of the adaptations of the Fate series that has received better reviews due to its narrative and complex characters, as well as for exploring philosophical and psychological themes with a, particularly somber tone.

Differences between Seinen and Shōnen

The seinen is manga/anime intended for the adult male audience, ages 20-40. On the other hand, shōnen are stories for “children”, between 12 and 18 years old. However, this division is not as easy as it seems at first glance.

The main difference between both classifications is in the subject matter they address. The seinen often deals with more complex, mature, and tough subjects. The shōnen tend to have action scenes, comic relief and accompany the development of a hero (or group) along with the frame. Fellowship between boys or men in a sports team is also often emphasized in a shōnen. Of course, scenes of physical and psychological violence are also usually much milder.

It is important to remember that shōnen and seinen are not genres of anime, but demographic classifications, that is, indications to know what age group they are intended for. Also, we need to pay attention to another important factor: the concept and criteria that define “maturity” for the Japanese are slightly different from those for most Westerners. Therefore, it is quite common for a work to be originally classified as shōnen, but it is relaunched as a seinen when it reaches the West.